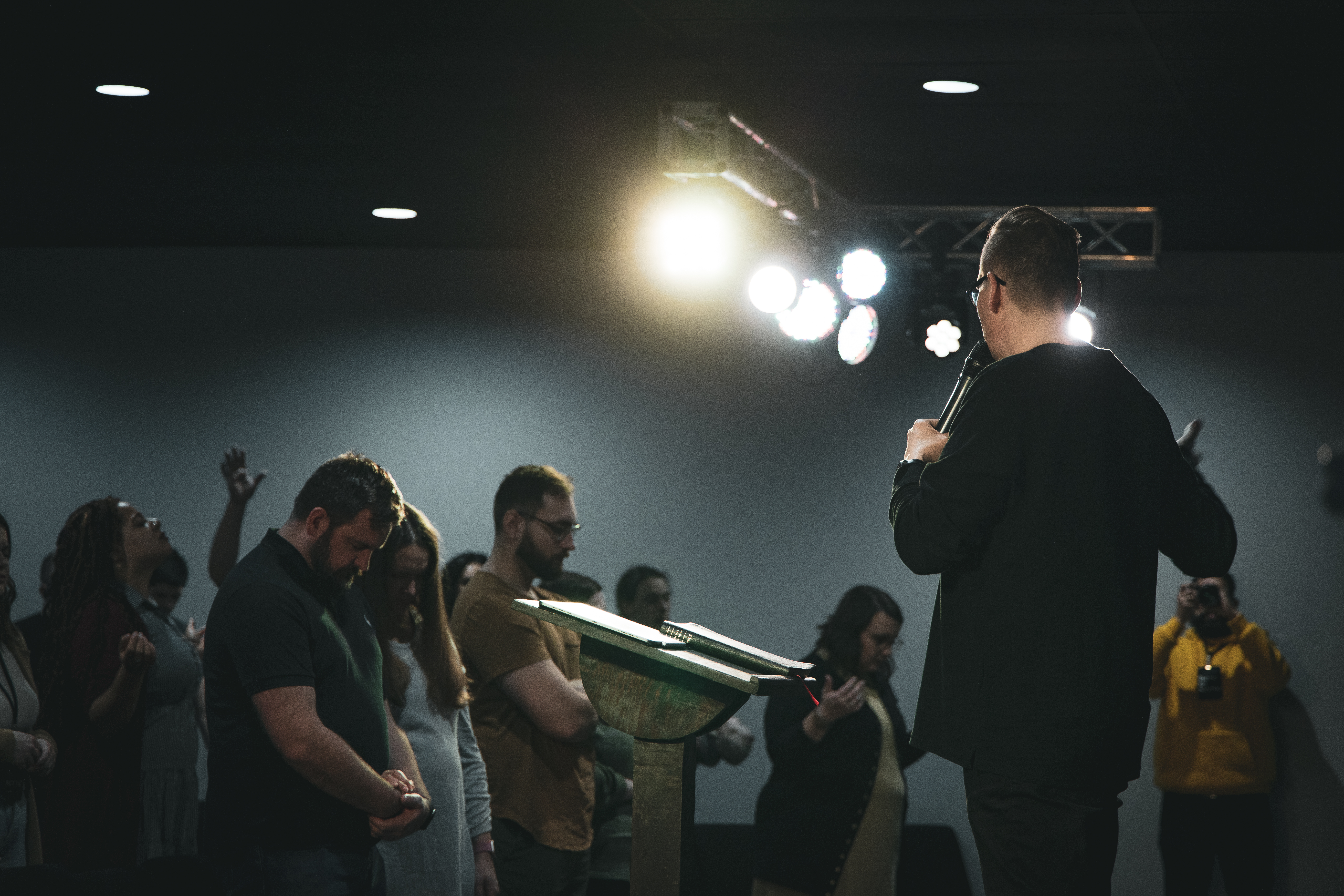 The Spirit of The Wild

Creativity always flows out of identity.

Genesis 1:24-26 (NLT) 24 Then God said, “Let the earth produce every sort of animal, each producing offspring of the same kind—livestock, small animals that scurry along the ground, and wild animals.” And that is what happened. 25 God made all sorts of wild animals, livestock, and small animals, each able to produce offspring of the same kind. And God saw that it was good. 26 Then God said, “Let us make human beings in our image, to be like ourselves. They will reign over the fish in the sea, the birds in the sky, the livestock, all the wild animals on the earth, and the small animals that scurry along the ground.”

Exodus 32:1-5 (NLT) 1 When the people saw how long it was taking Moses to come back down the mountain, they gathered around Aaron. “Come on,” they said, “make us some gods who can lead us. We don’t know what happened to this fellow Moses, who brought us here from the land of Egypt.” 2 So Aaron said, “Take the gold rings from the ears of your wives and sons and daughters, and bring them to me.” … 4 Then Aaron took the gold, melted it down, and molded it into the shape of a calf. When the people saw it, they exclaimed, “O Israel, these are the gods who brought you out of the land of Egypt!” 5 Aaron saw how excited the people were, so he built an altar in front of the calf. Then he announced, “Tomorrow will be a festival to the LORD!”

Two Idols:
1. Lenses
A. Experience
“Revelation is meant to serve as a floor not a ceiling”
B. Familiarity
"We have become all too familiar with a God we hardly even know." - Bobby Conner.
Ezekiel 14:4-5 (NIV) …When any Israelite sets up idols in his heart and puts a wicked stumbling block before his face and then goes to a prophet, I the LORD will answer him myself in keeping with his great idolatry. 5 I will do this to recapture the hearts of the people of Israel, who have all deserted me for their idols.'

Hebrews 11:6 (NKJV) Without faith it is impossible to please Him, for he who comes to God must believe that He is, and that He is a rewarder of those who diligently seek Him.

Believe He is.
Hebrews 12:28-29 (NLT) 28 Since we are receiving a Kingdom that is unshakable, let us be thankful and please God by worshiping him with holy fear and awe. 29 For our God is a devouring fire.

DILIGENTLY SEEK HIM.
God is not safe….but we are…
“Grace does not change Gods nature it changes our approach.”
We should not fear approaching him we should fear the distance…
Hebrews 4:16 (NLT) So let us come boldly to the throne of our gracious God. There we will receive his mercy, and we will find grace to help us when we need it most.
How do we seek a God that is wild?

“Being wild is being like Dad.”
Then we were tamed…
Genesis 2:15-17 (NLT) 15 The LORD God placed the man in the Garden of Eden to tend and watch over it. 16 But the LORD God warned him, “You may freely eat the fruit of every tree in the garden— 17 except the tree of the knowledge of good and evil. If you eat its fruit, you are sure to die.”

“The things that are forbidden are the things that tame us.”
Genesis 4:2-12 (NIV) Now Abel kept flocks, and Cain worked the soil. 3 In the course of time Cain brought some of the fruits of the soil as an offering to the LORD. 4 But Abel brought fat portions from some of the firstborn of his flock. The LORD looked with favor on Abel and his offering, 5 but on Cain and his offering he did not look with favor. So Cain was very angry, and his face was downcast. 6 Then the LORD said to Cain, "Why are you angry? Why is your face downcast? 7 If you do what is right, will you not be accepted? But if you do not do what is right, sin is crouching at your door; it desires to have you, but you must master it." 8 Now Cain said to his brother Abel, "Let's go out to the field." And while they were in the field, Cain attacked his brother Abel and killed him. 9 Then the LORD said to Cain, "Where is your brother Abel?" "I don't know," he replied. "Am I my brother's keeper?" 10 The LORD said, "What have you done? Listen! Your brother's blood cries out to me from the ground. 11 Now you are under a curse and driven from the ground, which opened its mouth to receive your brother's blood from your hand. 12 When you work the ground, it will no longer yield its crops for you. You will be a restless wanderer on the earth.”

“Sin always leave us restless and wandering, God’s intent us for us to be exhilarated and wondering.”

RE-WILDED
1. Reform- Your view on what freedom really is.
Wild/Freedom does not mean that there are no boundaries.

2. Reposition- Your identity in Christ by being reborn.
Romans 6:8-14 (NIV) 8 Now if we died with Christ, we believe that we will also live with him. 9 For we know that since Christ was raised from the dead, he cannot die again; death no longer has mastery over him. 10 The death he died, he died to sin once for all; but the life he lives, he lives to God. 11 In the same way, count yourselves dead to sin but alive to God in Christ Jesus. 12 Therefore do not let sin reign in your mortal body so that you obey its evil desires. 13 Do not offer the parts of your body to sin, as instruments of wickedness, but rather offer yourselves to God, as those who have been brought from death to life; and offer the parts of your body to him as instruments of righteousness. 14 For sin shall not be your master, because you are not under law, but under grace.15 What then? Shall we sin because we are not under law but under grace? By no means! 16 Don't you know that when you offer yourselves to someone to obey him as slaves, you are slaves to the one whom you obey--whether you are slaves to sin, which leads to death, or to obedience, which leads to righteousness? 17 But thanks be to God that, though you used to be slaves to sin, you wholeheartedly obeyed the form of teaching to which you were entrusted. 18 You have been set free from sin and have become slaves to righteousness.

3. Resist & Restrain
James 4:7 (NIV) Submit yourselves, then, to God. Resist the devil, and he will flee from you.

Breaking free from the system

The Spirit of the Wild
Genesis 1:2 (NLT) The earth was formless and empty, and darkness covered the deep waters. And the Spirit of God was hovering over the surface of the waters.

Matthew 3:1-11 (NIV) 11 ”I baptize you with water for repentance. But after me will come one who is more powerful than I, whose sandals I am not fit to carry. He will baptize you with the Holy Spirit and with fire.

Ezekiel 36:26-27 (NLT) I will give you a new heart, and I will put a new spirit in you. I will take out your stony, stubborn heart and give you a tender, responsive heart. 27 And I will put my Spirit in you so that you will follow my decrees and be careful to obey my regulations.

2. Wild Life
Romans 8:6 (NIV) The mind controlled by the Spirit is life and peace.
The Residual Flow of Gods breath….

3. Wild Power
Acts 10:38(NIV) God anointed Jesus of Nazareth with the Holy Spirit and with power. Then Jesus went around doing good and healing all who were oppressed by the devil, for God was with him.

Acts 1:8 (NIV) You will receive power when the Holy Spirit comes on you; and you will be my witnesses in Jerusalem, and in all Judea and Samaria, and to the ends of the earth."

Luke 11:9-13 (NIV) 9 "So I say to you: Ask and it will be given to you; seek and you will find; knock and the door will be opened to you. 10 For everyone who asks receives; he who seeks finds; and to him who knocks, the door will be opened. 11 "Which of you fathers, if your son asks for a fish, will give him a snake instead? 12 Or if he asks for an egg, will give him a scorpion? 13 If you then, though you are evil, know how to give good gifts to your children, how much more will your Father in heaven give the Holy Spirit to those who ask him!"

Psalm 92:12-15 (NIV) 12 The righteous will flourish like a palm tree, they will grow like a cedar of Lebanon; 13 planted in the house of the LORD, they will flourish in the courts of our God. 14 They will still bear fruit in old age, they will stay fresh and green, 15 proclaiming, "The LORD is upright; he is my Rock, and there is no wickedness in him.”

The church, revival started in the context of community.
Acts 2:1 (NIV) When the day of Pentecost came, they were all together in one place.

Acts 2:42-47 (NLT) All the believers devoted themselves to the apostles’ teaching, and to fellowship, and to sharing in meals (including the Lord’s Supper ), and to prayer. A deep sense of awe came over them all, and the apostles performed many miraculous signs and wonders. And all the believers met together in one place and shared everything they had. They sold their property and possessions and shared the money with those in need. They worshiped together at the Temple each day, met in homes for the Lord’s Supper, and shared their meals with great joy and generosity — all the while praising God and enjoying the goodwill of all the people. And each day the Lord added to their fellowship those who were being saved.
“Isolation can rob the church of power!”

#2. Trust. A vulnerable confidence.
James 5:16 (NLT) Confess your sins to each other and pray for each other so that you may be healed.

#3. Respect: Recognizing and embracing differences.
1 Corinthians 12:18-22 (NLT) 18 Our bodies have many parts, and God has put each part just where he wants it. 19 How strange a body would be if it had only one part! 20 Yes, there are many parts, but only one body. 21 The eye can never say to the hand, “I don’t need you.” The head can’t say to the feet, “I don’t need you.” 22 In fact, some parts of the body that seem weakest and least important are actually the most necessary.

#4. Grace: Treating weakness with tenderness.
Ephesians 4:2 (NLT) Always be humble and gentle. Be patient with each other, making allowance for each other’s faults because of your love.

#5. Commitment/Love
Acts 2:42 (NLT) All the believers devoted themselves to the apostles’ teaching, and to fellowship, and to sharing in meals (including the Lord’s Supper ), and to prayer.
“They were not Just devoted to Jesus, they were devoted to one another!”

A. Be Invested…Be present & contribute.
Romans 12:15 Rejoice with those who rejoice, and weep with those who weep.
B. Make sacrifices
C. Stick it out.
Tension builds bonds. (Pr 27:17 Iron sharpens)

Ephesians 3:17 (NIV) And I pray that you, being rooted and established in love, 18 may have power, together with all the saints, to grasp how wide and long and high and deep is the love of Christ.